Multiple features are available to drones for capturing essential information on buildings, such as cameras, GPS units and thermal sensors.

They can transmit the information collected to a computer using drone software. This allows users to organize, analyze and interpret the data. These features increase efficiency in project management and allow more thorough inspections.

Drones aren’t new to construction, but construction companies are adopting them faster than ever. Drones are invaluable in building, whether used to do land surveys or keep track of equipment.

Drones have direct benefits for the construction process. Drones can reduce costs, time and risk as well as labor. They also improve workflow, accuracy and communication. These capabilities allow for greater confidence and security when working on construction projects.

Although drones are still in their infancy, they are already changing the industry and how construction projects are managed.

The commercial drone will undoubtedly be around if it can pass all federal aviation and zoning regulations. See the infographic below for more details. 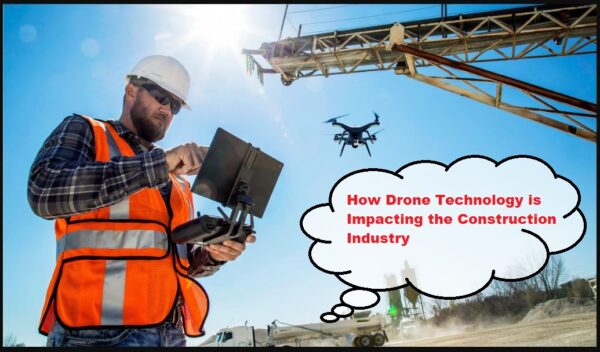 How Drone Technology is Impacting the Construction Industry

Unmanned aerial vehicles, also known as drones or UAVs, are autonomous flying machines that can navigate without the assistance of humans.

Drones can travel to remote areas that are difficult to reach for humans or too risky or expensive to send people.

Drone technology has changed everything, from commerce to military operations and real estate.

Thanks to the increased attention and investment in construction tech, it is poised to disrupt the way construction companies survey, document, and complete their projects.

These are just a few ways that drones impact construction projects, before, during and after groundbreaking.

Drone technology is improving; drones can solve these issues and perform some of the most dangerous on-site tasks.

Drones are small, light, and capable, and they can take ultra-high-resolution photos that replace current costly and time-consuming site surveying, inspection, or hazard analysis.

Drones can travel to places that people cannot. This allows them to capture more detailed, safer, and cheaper images of hazards and operations.

BIM (building information modeling) is another area where drone technology has been a boon. Komatsu is a Japanese technology company that has teamed up with Skycatch to provide drone services for “Smart Construction.”

The project uses drone footage to create 3D renderings on the Jobsite. This digital representation shows the physical and functional characteristics of a building or facility.

The drones allow meaningful and valuable comparisons between BIM design and actual construction.

This IoT-enabled technology can be updated in real-time, making it possible to monitor changes on the job site minute-by-minute.

Multiple drones can stream live from the site so that you can view it anytime. It can be considered anywhere, thanks to its IP address.

This visual record of a construction site can help crews keep track of schedules and capture milestones.

The footage can also be shared with clients or key stakeholders who need accurate, current updates on their projects.

It is possible to make better decisions about insulating homes and buildings in the future. Drones can survey and collect information from birds-eye sites that is otherwise unavailable. This allows contractors to make more informed and real-time building decisions.

Siemens has used drones to monitor the energy consumption at its Aspern Vienna Urban Lakeside project in Austria, one of the most significant European projects. Once the project is completed, this information can be used to improve insulation and building design to lower energy consumption and energy bills.

Construction has a reputation for being slow to adopt the technology. However, drone technology is helping them improve productivity, reduce overhead costs, and increase revenue. Although drones can’t replace an experienced and well-trained crew of workers, they are a great way to streamline construction projects.

There are many drone types, but commercial drones are the most common. There are fixed-wing models and models with rotating blades. Their design and their use are the main differences.

Fixed-wing drones are airplane-like and can glide along a fixed path, reaching higher altitudes than any other type of drone. They can only fly forward, so they won’t be able to work in tight areas or with lots of obstacles. They efficiently perform pre-construction tasks such as mapping topography or surveying large areas.

Rotors in Rotary drones allow them to hover in one place and stay stable. This makes them more controllable than fixed-wing drones. These drones can be used for inspections, structural scans, and surveillance over short distances.

The Future of Construction Drones

Drones aren’t new to construction, but construction companies are adopting them more quickly than ever. Drones are invaluable in building, whether used to perform land surveys or keep track of equipment.

The drone’s high lifting capabilities make it ideal for transporting construction materials or other heavy loads.

Other areas are also being advanced by drone technology. Drones will be able to guide and direct autonomous cars in the future.

Drones have the potential to reduce costs, time and risk as well as improve workflow, accuracy and communication. These technologies will further simplify the construction process if adopted on a larger scale.

Although drones’ impact on the construction industry is still being developed, they are already changing how construction projects are managed.

It’s safe to assume that commercial drones will be around as long as they can pass all federal aviation and zoning regulations. See the infographic below for more details.