Difference Between HID and LED Headlights

What’s the Difference Between HID and LED Headlights – Three types of headlights are commonly used in cars used by passengers today, including light-emitting diode (LED), halogen and high-intensity discharge (HID).

Halogen headlights are the most well-known; however, the other two are getting the spotlight’s attention due to their superior lighting.

When changing your car’s headlights, it is common to look at HID bulbs vs. LED bulbs. Here are the distinctions in the three bulbs you can choose from. 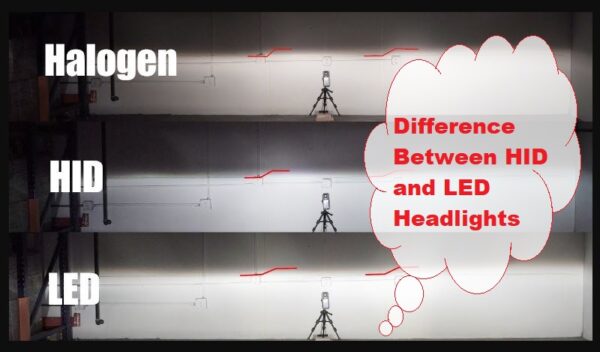 The latest advancements in headlight technology are based on LED lighting. Since 2010, Audi began using LED lights, mostly for accent lighting, to give the car an iconic style.

LEDs, similar to HIDs, create a white light which certain drivers prefer over the traditional yellow light of Halogens.

In terms of how they function, an electric current flows through a diode or semiconductor to emit intense light and generate significantly lower heat levels than incandescent bulbs.

They’re unable to burn out, but they get dim with time. They’re also smaller than many kinds of lighting, allowing for greater design flexibility. Every manufacturer has its style.

In the 90s, automobile manufacturers began slowly adding HID headlights to their vehicles. HID lamps emit artificial light that does not have a filament.

Instead, they light in the same manner as mercury vapor lamps. The gas of high-pressure xenon is charged with high-voltage electrodes.

This is why the HID lamps are commonly described as xenon-based headlights. The illumination of HID lights is three times greater than the halogen light source, making it much easier for drivers to see signs and road reflectors.

HIDs are generally set behind projector beam headlight assemblies to improve focus and lessen glare from vehicles in front of them. They last longer than Halogen bulbs and are more energy efficient.

Halogen bulbs are comparable to light bulbs that use incandescent since they both utilize filaments. In contrast to incandescent lightbulbs, which have a tungsten filament that is housed in the glass but halogens have a more intricate design, and the filament of halogens is enclosed by the quartz capsule and is filled with bromine and iodine gases, which cause the light to burn hotter and more bright. Halogens last two or more times the time of conventional incandescent bulbs.

HID VS. LED: Other Considerations

If you upgrade to LED or HID headlamps, be aware that HIDs require only a few seconds before reaching full brightness, whereas LEDs instantly light up. LEDs last longer and require less energy than HIDs, which gives them an advantage that extends beyond the peripheral lighting capabilities.

What Are LED and HID Headlights?

HID and LED headlights are lighting fixtures and car accessories that allow drivers to see clearly at night. In the past, many automobile manufacturers used halogen light bulbs in their vehicles that utilized nitrogen and argon gasses to heat filaments and created light.

HID headlights, also known as high-intensity discharge headlights, are headlights made of metals and gas to create a bright blue-white light as the filament is heated. Certain HID lights do not use filaments but charge xenon using high-voltage electrodes.

Headlights with HID are top-quality, known because of their brightness and capacity to last for a long time. This kind of headlight is great for driving at night.

LED headlights are light-emitting diode headlights. They use semiconductors to transmit photons that emit energy that produce light. The headlights are hot, so some need additional heat sinks or fans to regulate the temperature.

Some of the key features and differences of each include:

Types of LED and HID Headlights

Philips Xenon Standard: These bulbs are high-intensity discharge, with a power rating of 35 Watts and 85 Volts. They come with a certification of authenticity and are dependable.

HD Warehouse Bulbs:The bulbs are inexpensive and come in various colors, including Ruby Pink and Midnight Purple. This type of light also has bulbs that have different temperatures.

Sylvania HID Headlight: The most well-known bulb brand, is simple to locate and replace. Some manufacturers use these bulbs in their vehicles. They are similar to Philips Xenon Standard bulbs, rated with 35 Watts and 85 Volts.

Honcs Headlight Bulb: They are headlight bulbs that are simple to install and use the aluminum heat sink to cool in place of the fan.

Aukee Headlight Bulb: The bulbs feature an efficient cooling fan that can withstand heavy rain. Experts recommend them as foglights.

How To Choose Your Headlight Upgrade

If you’re looking to upgrade or replace your headlights Which type of headlight is best to choose? While HIDs and LEDs are a popular aftermarket option because of their design, they’re certainly not better than halogen or tungsten headlights.

Also, Consumer Reports found no distinctions in forward-seeing abilities in any of the three types when the low beams are in use which is the most common setting in driving.

HIDs and LEDs have an advantage over halogens because they provide superior light towards the roadsides and are a crucial factor for drivers seeking to broaden their field of vision.

However, there’s no definitive winner between LEDs and HIDs since they function similarly dependent on the car.